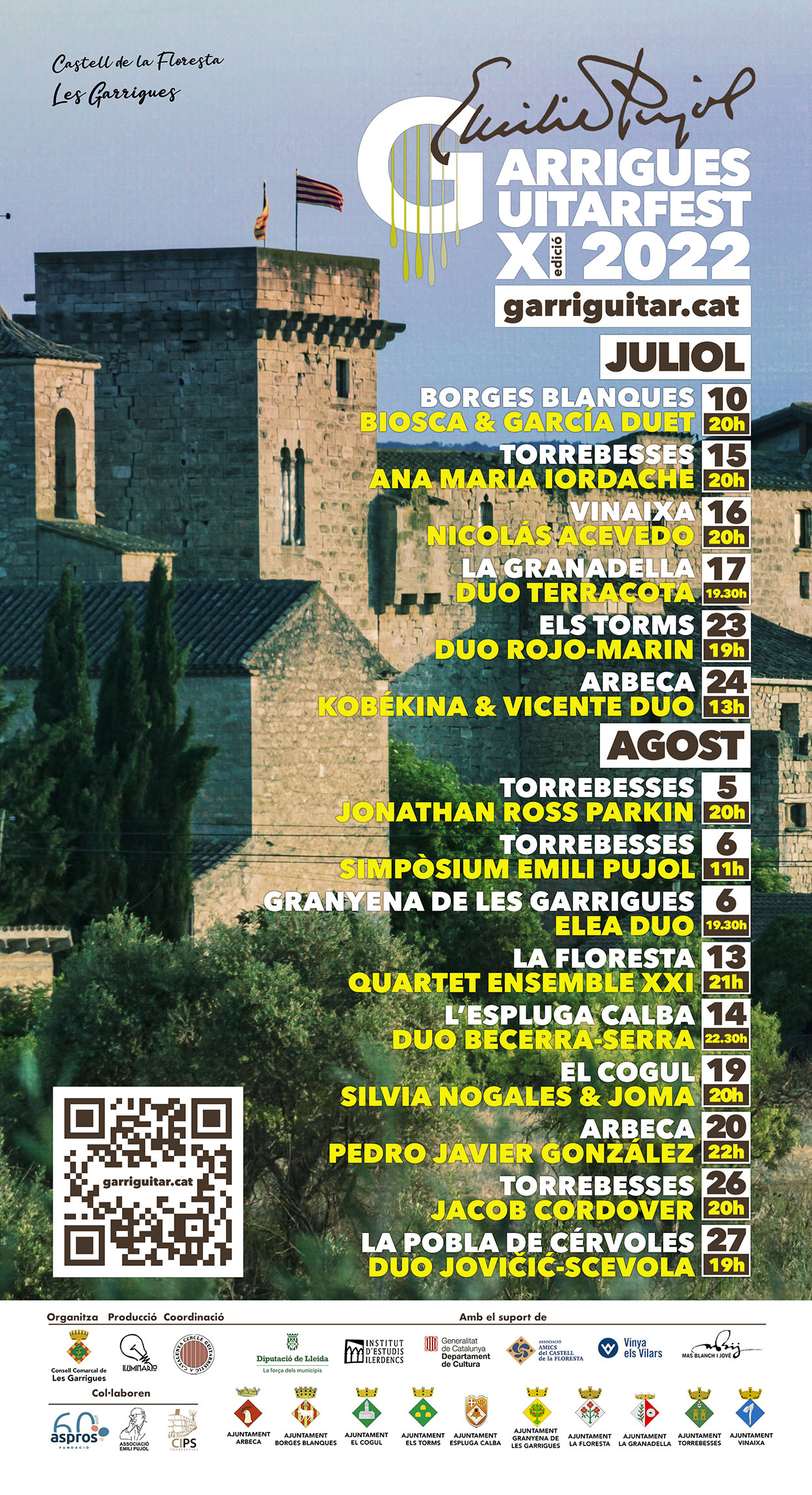 The starting pistol shot will be on Sunday July 10 in Les Borges Blanques with an oral show to the rhythm of agreements in the courtyard of the Casal Marino. Barbarities narrated by the actress Jordina Biosca will stand out with the six strings of the guitar of David García. An explosion for the senses that will surely not leave anyone indifferent.

The following week will continue the concerts in the Romanesque churches of Torrebesses and Vinaixa, temples with a spectacular sound performed by the talented Romanian guitarist Ana Maria Iordache, winner of the Llobet 2021 in Barcelona, ​​and the Chilean guitarist Nicolás Acevedo2 de la Granadella. It will end in the cathedral of Les Garrigues, the church of Santa María de Gracia de la Granadella, with the Terracotta Duo, Jordi Roure from Lleida on viola and Carles Herraiz on guitar.

The first part of the festival will end in July at the church of Els Torms with the participation of the young duo formed by Sara Rojo on violin and Miguel Marín on guitar, and in the church of Arbeca the performance of the veteran chamber duo formed by Olga Kobékina on the harpsichord and Sergi Vicente on the guitar, both professors at the Barcelona Liceu Superior Conservatory of Music.

The second part of the festival will continue on Friday, August 5 in Torrebesses, where the second concert will be held in the church of Sant Salvador and where the English soloist Jonathan Ross Parkin will delight us with his proposal Towards the South, with great European works for guitar. The following day the Emili Pujol Symposium will begin, a conference on the figure and work of the master Catalan guitarist. In the afternoon, the concert by the duo made up of Ana Cambra on guitar and Toni Campos on clarinet will recreate a colorful sound space in the church of Granyena de les Garrigues.

The following weekend it will be the turn of the spectacular castles of La Floresta and Espluga Calba, where we will enjoy the magic of Celtic ballads and dances by the Ensemble XXI quartet from Lleida, directed by the guitarist and composer José Antonio Chic, and the duo formed by Carmen Becerra from Tarragona on guitar and Isabel Serra on transverse flute.

On Friday, August 19, it is time to visit the cave complex of the Roca de los Moros del Cogul, a World Heritage Site. The Vestigis del Cogul show will be presented, expressly created for the occasion with a live pictorial concert by the guitarist Silvia Nogales and the painter Josep Maria Rius (JOMA). On Saturday the 20th we will return to the usual and excellent wine tastings at the Els Vilars vineyard, which this time will accompany the flamenco and jazz guitar concert by Barcelonan Pedro Javier González, one of the greatest exponents of the instrument who has delighted the public with his art together with artists such as Joan Manuel Serrat, Lluís Llach or Maria del Mar Bonet.

The last week of August will continue with the third and last concert at the Torrebesses church, by the virtuoso Australian soloist Jacob Cordover, with jewels of guitar literature and world premieres. In the vineyard of the Mas Blanch and Jové Artists, in Pobla de Cérvoles, with tastings of their wines and spectacular landscapes full of art, the eleventh edition of the festival will close with a tribute concert to invisible women composers, which will illustrate the duo formed by the Serbian soprano Milica Jovičić and the Chilean guitarist Gian Carlo Scevola. 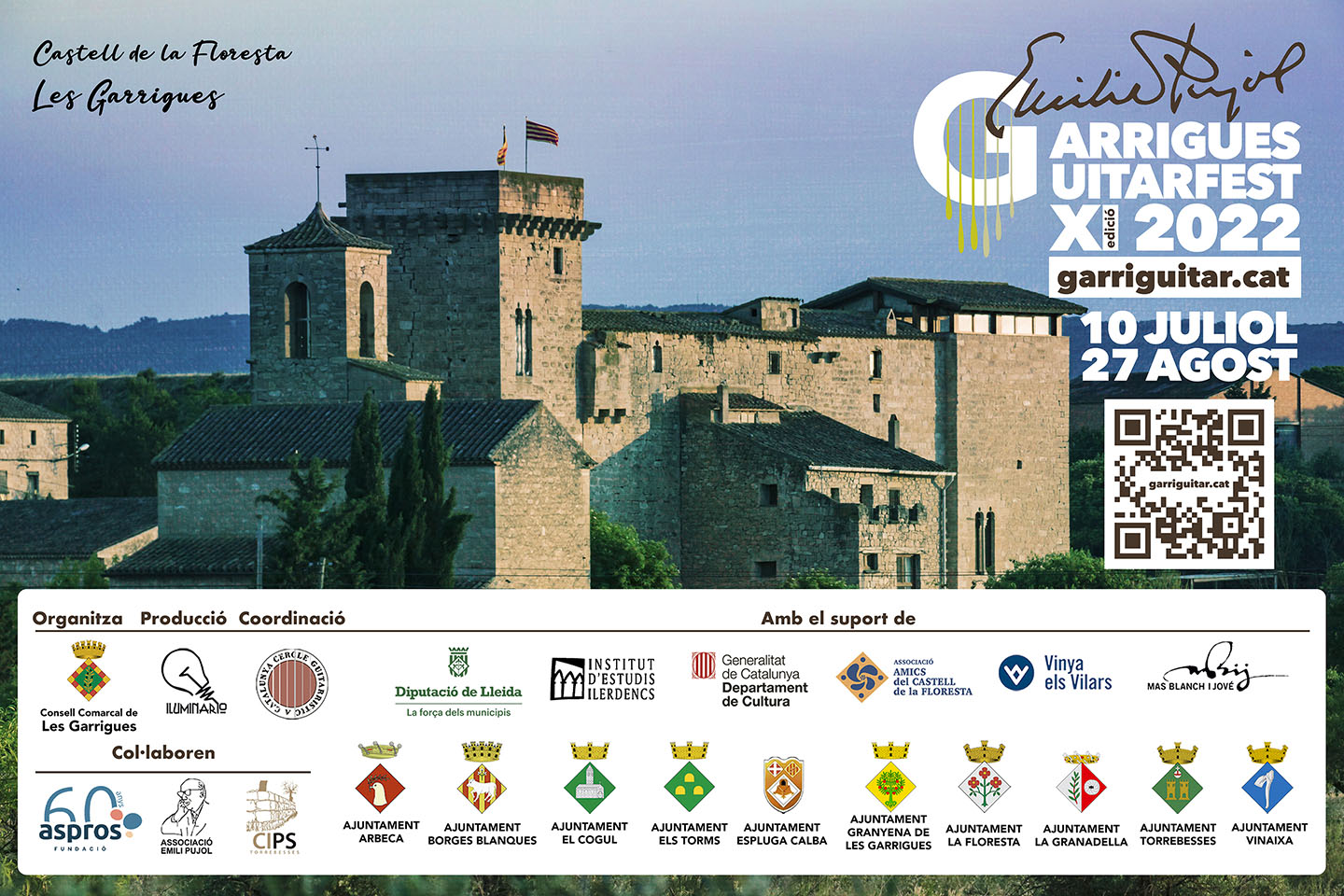